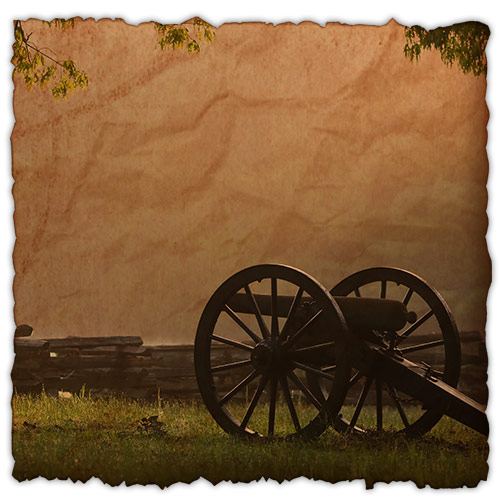 Civil War (War Between the States)

Eleven states seceded from the Union and called themselves- The Confederate States of America. They were fighting the right to keep ‘human property.’ The Union ‘Blues’ seen 110,000 killed in action or die from fatal wounds. 25,000 died in Confederacy Prisons and another 2,260 were killed in the Navy/Marines. The Confederacy ‘Grays’ count was 72,524 killed in action and 137,000 wounded; resulting in 260,000 deaths. Brother fought against brother in this conflict.

President Abraham Lincoln issued the Emancipation Proclamation January 1, 1863 (freedom from slavery). Allowing stronger emphasis on abolishing slavery, the 13th amendment was passed by the Senate (April 8, 1864) and the House (Jan. 31, 1865). The following three amendments of our constitution were directed to recognize and give the colored ‘equal rights.’ Information from Wikipedia, the free encyclopedia.

Taps is the song, giving reverence to veterans. The creation of this song began in 1862 during the Civil War. Union Captain Robert Ellicome and his men were near Harrison’s Landing in Virginia. The Confederate was on the other side of this narrow strip of land. During the night, Ellicombe heard the moans of a soldier who was severely wounded on the field. Not knowing if this soldier was a Union or Confederate soldier, the captain decided to bring this soldier in for medical attention. Crawling on his stomach, the captain reached the soldier and dragged him back to the Union camp. When he reached the safety of camp, the captain lit a lamp and seen the soldier was his son. His boy had been studying music in the south when the war broke out and joined the Confederate Army and hadn’t told his father. The captain requested a decent funeral for his son, despite his enemy status. Since his son was a rebel, the request was only partial granted; only letting one musician play. The captain chose a bugler and asked to play the series of notes he found in his son’s pocket. That melody, now known as Taps, has been played at military events, ever since.

The first Sharpshooters Regiment in the Union Army was created by Hiram C. Berdan of New York in 1861. Before serving as a colonel in the war, Berdan was a mechanical engineer and a creative inventor. He created the Berden Repeating Rifle and the Berdan Center Fire Primer (a range finder torpedo boat for evading torpedo nets during and after the Civil War). His interest in rifles and shooting enticed him to create regiments for men with notable shooting skills. They were from New York, New Hampshire, Vermont, Michigan and Wisconsin. The volunteer recruits had to pass a rifle test in order to qualify; they had to place ten shots in a circle of ten feet diameter from 200 yards away. They were allowed to choose a rifle and position for the test. Berdan asked for ‘a keen eye, steady hands and had lots of training and skill with a rifle.’ It took cool nerves to estimate their target and determine the effect of any wind occurring.

Berdan chose to have the men to use the Sharps Rifle- it was fast loading and had outstanding accuracy from long-range distances. Lieutenant General Winfield Scott denied Berdan’s choice- he said, “It will lead to a waste of ammunition.” Berdan demonstrated the rifle’s extreme speed and accuracy to President Lincoln. Lincoln was impressed and ordered them to be issued. The Sharp rifle weighted about 12 pounds, 47 inches long with a 30-inch barrel that fired cartridges with a .52 caliber conical ball. The rifle was accurate up to 600 yards that allowed the shooter to put twenty bullets in a 24-inch pattern from 200 yards away. The first regiment of volunteers began service in late November 1861 and fought in every eastern battle until the autumn of 1864 assigned with a mission to kill enemy targets from a far distance. They were, especially, noted in the battles of Yorktown, Gettysburg, Vicksburg, Chattanooga, Atlanta, Spotsylvania and Petersburg. Originally, the Sharpshooter uniform was green in color, not the standard Union Blue. Their knapsack was a Prussian-style sack, fitted over a wooden frame, not the usual tarred canvas. As the war went on, the men were issued blue uniforms, making it harder for the Rebels to distinguish them from the regular soldiers. Regiment G from Wisconsin originated in September 1861. Some were from Brooklyn.

Ezzan Benson enlisted in 1861, answering to the call of President Lincoln, as a three-month volunteer. At the ending of the commitment, Benson enlisted with Berdan’s Sharp Shooters (one of Berdan’s first volunteers). At the formation of the 42nd Wisconsin Regiment, Benson became Captain of Company G. He was in forty-seven battles of the war. Luckily he was never wounded or disabled, although the hardships of the war broke down his health. He was bedfast for two years before dying. His body lies in Jug Prairie Cemetery, southwest of Brooklyn.

John S. Bell enlisted in the Randall Guards, Company H, 2nd Wisconsin. He was rejected because of his size. He enlisted again in Janesville in Company D of that same regiment and was accepted May 19th, 1861. Participating in battles for four years, he eventually became a captain. He was shot in the head during Bull Run and was left on the field, supposedly dead. Captured by the Rebels, he was taken to Manassas Junction (wound unattended), then to Libby Prison where he received treatment. His skull was trepanned (an early surgical tool drilled the bone). Following recovery in Alabama, Bell was sent home.

His following assignment was in Bayfield County, Wisconsin to protect the settlers there- Indian uprising were happening in Minnesota.
Reporting back to his regiment, they made their way to Philadelphia to protect the city against General Lee’s advancing rebels. The Second Wisconsin was very active in various battles, greatly reduced; they were united with the Sixth Wisconsin. Participating in battles of the Wilderness and Hatcher’s Run; Bell was wounded in the head again. He endured the suffering until the South surrendered. Along with others, Bell shared their rations with hungry rebels. Bell mustered-out at Jeffersonville, Indiana July 25, 1865 as a captain. Home again, Bell operated a ‘depot of agricultural implements,’ managed a hotel and was a postmaster at Brooklyn besides farming. John Bell bought and platted lots which became the ‘Village of Brooklyn’.

Brooklyn Area Soldiers That Served in the Civil War 1861-1865