The Allies opposed the Axis, involving more than 100 million people from more than thirty countries. Invasions were happening all over the globe. Germany formed the Axis Alliance conquering much of Europe, beginning with the invasion of Poland- Sept. 1, 1939. Italy joined. The United Kingdom and members of the British Commonwealth were the major forces against the Axis Alliance.

In June 1941, the Axis Force advanced their conquest over Soviet Union. Joining the Axis, Japan made an attack on Pearl Harbor that started the WWII war in December 1941.  The Axis was stopped in 1942, losing at Midway, near Hawaii; Germany was defeated in North Africa and at Stalingrad in Russia. In 1943, there was a series of defeats on the Eastern Front. 1944, the Western Allies invaded France. The following year, the Allies defeated the Japanese Navy and captured the Key Pacific Islands.

The war ended with an invasion in Germany. Still dealing with Japan, the Potsdam Declaration was drawn, asking for unconditional surrender; underlining terms, if denied. President Truman, Winston Churchill and Chiang Kai-shek agreed on terms, stating: “If they didn’t surrender, they would face prompt and utter destruction.” Opposition prompted the dropping of atomic bombs on Hiroshima and Nagasaki in August. Following an attack from the Soviet Union, Japan surrendered August 15, 1945.  Massive deaths of civilians were caused by the Holocaust, bombing of the cities and use of nuclear weapons.

The United Nations was established to bring countries together and prevent future conflicts. The Soviet Union and United States emerged as rival superpowers, setting the stage for the Cold War which lasted the following forty-six years.

– Information from Wikipedia, the free encyclopedia

Many lives were ended and many returned home to start a new life, memories stayed. 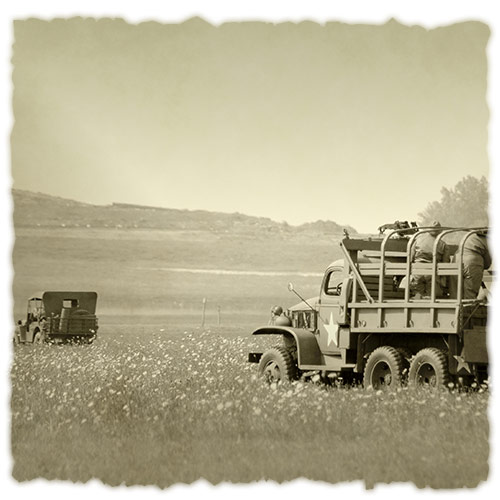